Guide for Aliyah from counteries of Post Soviet Union, all the information you need to know and a 3 steps guide!

A mass emigration was politically undesirable for the Soviet regime. The only acceptable ground was family reunification, and a formal petition ("вызов", vyzov) from a relative from abroad was required for the processing to begin. Often, the result was a formal refusal. The risks to apply for an exit visa compounded because the entire family had to quit their jobs, which in turn would make them vulnerable to charges of social parasitism, a criminal offense. Because of these hardships, Israel set up the group Lishkat Hakesher in the early 1950s to maintain contact and promote aliyah with Jews behind the Iron Curtain.
From Israel's establishment in 1948 to the Six-Day War in 1967, Soviet aliyah remained minimal. Those who made aliyah during this period were mainly elderly people granted clearance to leave for family reunification purposes. Only about 22,000 Soviet Jews managed to reach Israel. In the wake of the Six-Day War, the USSR broke off the diplomatic relations with the Jewish state. An Anti-Zionist propaganda campaign in the state-controlled mass media and the rise of Zionology were accompanied by harsher discrimination of the Soviet Jews. By the end of 1960s, Jewish cultural and religious life in the Soviet Union had become practically impossible, and the majority of Soviet Jews were assimilated and
non-religious, but this new wave of state-sponsored anti-Semitism on one hand, and the sense of pride for victorious Jewish nation over Soviet-armed Arab armies on the other, stirred up Zionist feelings. 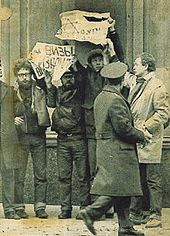 After the Dymshits-Kuznetsov hijacking affair and the crackdown that followed, strong international condemnations caused the Soviet authorities to increase the emigration quota. In the years 1960–1970, the USSR let only 4,000 people leave; in the following decade, the number rose to 250,000.
The exodus of Soviet Jews began in 1968.
Between 1968 and 1973, almost all Soviet Jews allowed to leave settled in Israel, and only a small minority moved to other Western countries. However, in the following years, the number of those moving to other Western nations increased.
Soviet Jews granted permission to leave were taken by train to Austria to be processed and then flown to Israel. There, the ones who chose not to go to Israel, called "dropouts", exchanged their immigrant invitations to Israel for refugee status in a Western country, especially the US. Eventually, most Soviet Jews granted permission to leave became dropouts. In 1979 a record 71,000 Soviet Jews were granted exodus from the USSR, of whom only 12,117 immigrated to Israel.
According to Israeli Immigrant Absorption Minister Yaakov Zur, over half of Soviet Jewish dropouts who immigrated to the US assimilated ceased to live as Jews within a short period of time.
Israel was concerned over the droupout rate, and suggested that Soviet emigres be flown directly to Israel from the Soviet Union or Romania. Israel argued that it needed highly skilled and well-educated Soviet Jewish immigrants for its survival. In addition to contributing to the country's economic development, Soviet immigration was also seen as a counterweight to the high fertility rate among Israeli-Arabs.
In addition, Israel was concerned that the dropout rate could result in immigration being banned once again. The Ministry of Immigrant Absorption's position was that "it could jeopardize the whole program if Jews supposedly going to Israel all wind up in Brooklyn and Los Angeles. How will the Soviets explain to their own people that it's just Jews who are allowed to emigrate to the US?" .


In 1989, the United States changed its immigration policy of unconditionally granting Soviet Jews refugee status. That same year, Soviet Premier Mikhail Gorbachev ended restrictions on Jewish immigration, and the Soviet Union itself collapsed in 1991. Since then, about a million Russians immigrated to Israel,
including approximately 300,000 who were not Jewish according to rabbinical law, but were eligible for Israeli citizenship under the Law of Return.
The number of non-Jews among the immigrants from the former USSR has been constantly rising ever since 1989. For example, in 1990 around 96% of the immigrants were Jews and only 4% were non-Jewish family members. However in 2000, the proportion was: Jews (includes children from non-Jewish father and Jewish mother) - 47% , Non-Jewish spouses of Jews - 14%, children from Jewish father and non-Jewish mother - 17%, Non-Jewish spouses of children from Jewish father and non-Jewish mother - 6%, non-Jews with a Jewish grandparent - 14% & Non-Jewish spouses of non-Jews with a Jewish grandparent - 2%


Interview with a Shaliach

As part of the Aliyah process, an interview with your local Aliyah Shaliach (Jewish Agency representative) will be required.
You will be asked to present all the aforementioned original documents:

These documents will be returned to you during your meeting.

The Aliyah Shaliach is a representative of the Jewish Agency for Israel who is responsible for validating your Aliyah documents and meeting with you. You can make an appointment to speak with the Shaliach directly, as per the listing below:


The interview will include these topics:

The Jewish Agency is the body responsible for authorizing Aliyah according to the Law of Return. Your application will be reviewed by The Jewish Agency, and you will receive a notification letter.

Together with your file manager or Shaliach you'll need to plan your absorption in Israel:

Once you're landing in Israel you're considered as an Oleh Chadash, Welcome to Israel!


Please visit our "Step-by-step" Guide of the first steps in Israel as a New Oleh.